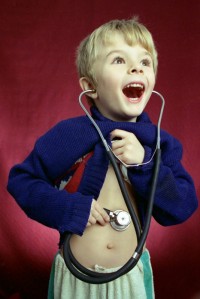 And not afraid of dark alleys & u-turns.

For those who are unfamiliar with the juggernaut that A.I is, I’ve written about my rollercoaster here, but let me try to provide a glimpse of that moment in time when A.I. is confirmed.

You’ve been sitting uncomfortably in the waiting room fidgeting, pretending to be interested in the latest Kardashians saga on the cover of Who magazine, whilst simultaneously hoping someone will want to play Words with Friends.

But the reality is you’re just waiting for your name to be called, and you pop your head up every time you hear the docs shoes approach the hallway…and then someone else steps up. Another sigh. Another 15 minutes.

And then, it’s time. The moment you’ve been waiting for, followed by the split moment where you’re hoping you can make a quick stage left exit.

You’re not meant to be here anyway. You’re over reacting. Your nan said you were a hypochondriac, it runs in the family.

But you follow the doc. Formalities are exchanged. You take a seat. You wait for a smile, it’s tortured, so you quickly try to put one on.

And then it comes.

The silence. The deafening silence.

Yet you can see the docs lips move. And the panic sets in, “I must be deaf! I can feel the blood rushing to my ears.”

But you’re not deaf. Nor are your ears burning. You’re in shock. And your brain is a powerful computer that is carefully selecting what you process.

I’ve mentioned it before, because of its many manifestations and a lack of funding and research, diagnosis of any A.I. disease, brings much more than just shock and confusion for a patient, it also brings much shock, confusion and helplessness for medical professionals.

They’re hoping you’re one of the text book cases. Responsive to pharmaceuticals. They know there will be an adjustment period. Where your body goes into shock as it gets hit by very powerful drugs. And they know you will experience some horrific days and question whether they know what they’re doing at all.

But they’re confident, to a certain degree. Until it starts to get complex. Until you don’t start to respond to text book therapy model. Until the doc says to you, “I’m increasingly seeing more cases where the standard recipe doesn’t work. I’m not sure what to do next.”

This is the moment where the A.I diagnosis hits you. And the prescription is in your hands. This is where you’ll need to dig into your bag of tricks.

Do you remember asking where strawberry milk comes from?

Because you know that chocolate milk clearly comes from brown cows.

Do you remember asking why a dog chases a cat?

Do you remember asking how can the sun warm up the earth, when it’s so little, compared to your beach ball?

And is it true that a turd-burger tastes like the best banana split you’ve ever dreamed of? Just like your brother told you?

Remember those traits? The ones that were probably beaten out of you in the corporate world. Pull those out, dust them off and don’t be scared.

Question the docs, the specialists, the Professors, the very educated men and women, with their multiple certificates hung proudly on the wall behind them. This is your first line of defence and support.

I’ve struggled with this, and I still do. I may read a journal article and think, finally an answer. And I’ll go into the docs office, with my notebook lined up to ask questions.

And then my courage wanes. I see all those certificates lined up. Somehow it just doesn’t sit right. I feel sheepish. Like I’m being the smart arse in class. Giggling and mocking from the back row. Challenging and hiding behind the class clown.

Sometimes I can shake the doubt and I ask about a research article I found and ask whether there is any further research in the influence that hormones play in A.I? And in my case, whether my non-existent rates of testosterone may be due to high metabolism found in women with lupus? Testosterone, a building block for energy, mood and muscle building. All which I have seen waste away.

And often the response is greeted with, “Yes, it’s a theory. But we have no idea how to reverse it.”

It’s a minefield. And one often fraught with frustration, desperation and plenty of tears. Off one merry go-round and onto another.

But what I try desperately to hold onto is motivation. Motivation to accept the challenge of the accidental investigator and to share my findings with my defence team.

On good days, I go down the google rabbit hole hoping I’ll pop up the other end and it’s still daylight. On a lucky day, I may even find a carrot. And add to my fibre content for the day.

It’s never a complete loss and I’ll always wonder about that turd burger.